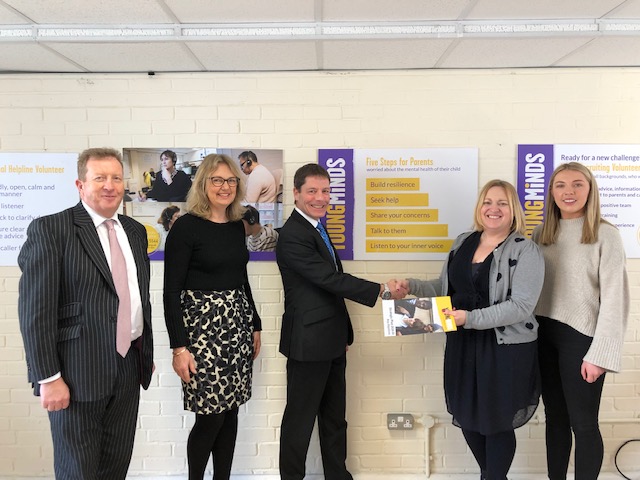 The Association of Property Lenders (APL) are proud to have supported YoungMinds, the UK’s leading charity helping children and young people with mental health.  At the APL’s Annual Fundraising Dinner held in November last year, 4 charities were supported of which YoungMinds was nominated by one of the title sponsor’s Savills.

In the photo above, (from L-R) Ian Malden (Head of Valuation, Savills), Alison Mennecier (Director, Savills), Neil Odom-Haslett, (President of the APL), Michelle Kerrigan (YoungMinds) and Hannah Pepper (Development Assistant YoungMinds) – (Neil is handing over the cheque for £15,000 to Michelle)

This year is particularly special for YoungMinds, marking 25 years since they were established. In that time there has been a much needed shift in the conversation around mental health and, vitally, the crisis in children and young people’s mental health is now widely recognised. Yet, for those who need it, help is still much too difficult to find: 84% of parents of children with mental health problems told us they find it difficult to get help for their child. Further still, 76% of parents told us that their child’s mental health deteriorated while waiting for support from Child and Adolescent Mental Health Services.  The APL’s donation will help YoungMinds continue their excellent work in helping those who need support.

The APL
We are delighted to give @MomentumCharity £20,000 from our Fund Raising Dinner - the largest single amount donated… https://t.co/eIo45w5Hrw
one year ago
The APL
Come and attend the next @APLenders event hosted at @BurgesSalmon on 2nd April covering problem loans and borrower… https://t.co/K2q0biVehx
one year ago